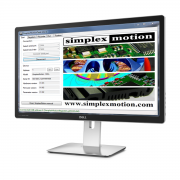 The continued work on improvements has resulted in a new updated version of SimplexMotionTool and a new Firmware.

Check implemented to make sure the firmware matches to motor

Rotary mode – Possibility to set the span of the motor position values. If for example it is set to 0-4096, it will be 0 after each full turn.

Encoder output added to the SC-series

Find a reseller
Reseller in Greece